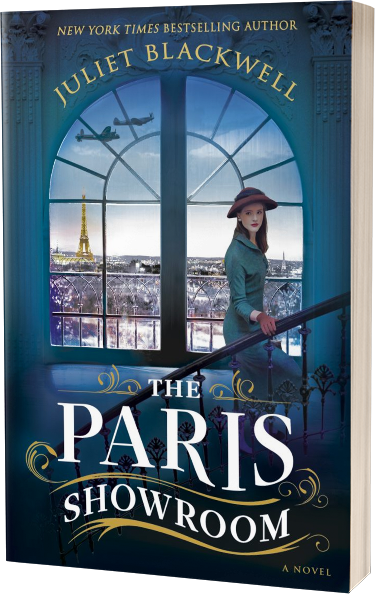 In Nazi-occupied Paris, a talented artisan must fight for her life by designing for her enemies.

Capucine Benoit works alongside her father to produce fans of rare feathers, beads, and intricate pleating for the haute couture fashion houses. But after the Germans invade Paris in June 1940, Capucine and her father must focus on mere survival—until they are betrayed to the secret police and arrested for his political beliefs. When Capucine saves herself from deportation to Auschwitz by highlighting her connections to Parisian design houses, she is sent to a little-known prison camp located in the heart of Paris, within the Lévitan department store.

There, hundreds of prisoners work to sort through, repair, and put on display the massive quantities of art, furniture, and household goods looted from Jewish homes and businesses. Forced to wait on German officials and their wives and mistresses, Capucine struggles to hold her tongue in order to survive, remembering happier days spent in the art salons, ateliers, and jazz clubs of Montmartre in the 1920s.

Capucine’s estranged daughter, Mathilde, remains in the care of her conservative paternal grandparents, who are prospering under the Nazi occupation. But after her mother is arrested and then a childhood friend goes missing, the usually obedient Mathilde finds herself drawn into the shadowy world of Paris’s Résistance fighters. As her mind opens to new ways of looking at the world, Mathilde also begins to see her unconventional mother in a different light.

When an old acquaintance arrives to go “shopping” at the Lévitan department store on the arm of a Nazi officer and secretly offers to help Capucine get in touch with Mathilde, this seeming act of kindness could have dangerous consequences.